i'm happy that fall is coming. it means i am busy at work. there are people on campus. eventually i'll work in apple picking & making a pie or two. play around with some fall color photos. there's the birthdays & halloween. i know more people now who celebrate their birthdays the same week as mine so we can't feel so bad about getting old when we're all adding a year at the same time lol. i've already started thinking of halloween costumes... we were trying to think of a theme and we talked about superheroes but i don't think everyone is agreeing on that. i do have a sweet dress for a catwoman outfit... but who knows if it would fit me yet. the weight loss is going slowly. as long as it doesn't go up i'm happy with the progress. i think just having the doctor harp on your weight is like peer pressure b/c you don't want to be embarrassed if you weigh more at the next visit.

it is chilly out and biking to work is a little bit faster because i'm sweating less. its always threatening rain though... but I've been lucky and only biked in rain once so far. hopefully that continues! i did score some rain appropriate pants i can bike in at the goodwill. found a pair of lululemon brand ones & some random vintage brand. if my sport clothes are name brand that means i'm more fashionable when i wear them in lieu of regular clothes right?? i wish. its hard to go from "biking" to "work" to "evening" wear. they should address this on What Not To Wear. haha.

the entourage is getting back together at the end of the month for a wedding! but we still have some single ladies to marry off! we all seem pretty much the same, just a little more tame w/age or wiser? lol. unfortunately the boyfriend can't make it but its fine b/c a lot of my friends are single so i can pay more attention to them and not have to include him in the conversation. also means i don't have to rent a hotel haha. although i think the guys in the group like when i bring someone b/c they get to talk to a dude instead of all these ladies ;p

Posted by Amorette at Wednesday, September 19, 2012 No comments:

time to admit its a sinus infection. gross. been playing phone tag with the nurses, its a pain they can't just agree w/me over the phone and prescribe something. internet seems to say they never know if its going to respond to antibiotics or not. last time i had one it was really bad so i went to the emergency room and they just gave me antibiotics. mucinex is helping b/c i don't have a fever. was grumpy after taking the T to work for 4 days so went back to biking today. had to take it a little easier. at least my knees have recovered. they were getting cranky.

its crunch time at work. trying to get everything ready for the semester. so it'd be nice if my head was clear. unfortunately not going to be the case.

i'm heading to CT two times this month. its the mom's birthday so i always head home for that & 2 of the college entourage are getting married so i'll be heading back for that at the end of the month. the bf is working a lot recently, looks like its tiring. at least i (usually) don't need extra hours to get things done.

actually crisp outside today... summer is ending and i always feel like i didn't get to the beach enough. but it will be back to 90s by the end of the week so i can still get some time in :)

i also want to get out and play with my new camera lenses. but when i'm not feeling 100% i usually just want to nap or laze out after i make it through work.

i've been feeling like i don't ever want to listen to music because it doesn't sound good on my stereo for a long time. recently one of the speakers got really quiet and it sounded even worse. so i spent a while looking online for a replacement and i couldn't find a sub $250 setup that had good reviews for sound & build quality and the right size to fit on my bookshelf where the old one had been. and i had just gotten a new sound system last year for my tv that was $300 (my parents paid half as a birthday gift). so i just went to goodwill and spent $20 on a 5 disc changer that just hooks up to my tv sound system. i thought that was a little overpriced for something from 12 years ago but its a sony and has the optical connector. now its sounding decent. but i only have one optical input on my system so i have to choose whether the music gets it or the movies/tv. hmmm... i doubt i can even notice the difference. its not as good as if i had a full surround sound setup, since i only have a soundbar and subwoofer but its way easier and i didn't want to run wires and wireless is even more expensive. just hope i don't wear this system out too fast! wonder if that is realistic.

Posted by Amorette at Wednesday, August 29, 2012 No comments: 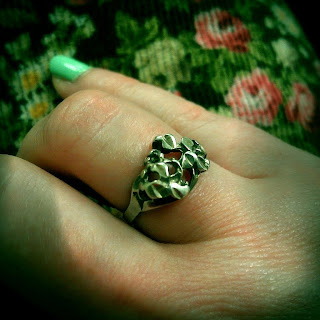 discovered a new to me local flea. got this sterling ring for five bucks... I think its handmade it has an odd little stamp next to the 925 mark... either a makers mark or an oops lol. did leave behind a claddagh ring I thought about getting but can't have everything! the background print is on my new jones new york cord skirt find at goodwill. somehow I knew it would be a perfect fit without even trying it on.

life has gotten in a groove. a summer groove. but luckily not the kind the bike tire gets stuck in and sends you toppling over.

its been really warm in boston and i've been visiting the docs a lot trying to get some kind of answers. but its hard to get answers out of them. they are trying to diagnose me with something that is not really a bad or scary thing but not a definite thing. in other words, there's no test to say that i do in fact have it and there's no set list of side effects. its an individual thing, to each his own. we've looked at my weight changes over the recent years and its been decided i need to lose some. i've known this obviously, i look at myself. so 10-15% loss and i might not have any symptoms. that was only around 15-23 pounds at first visit. so, not that bad right?

i joined a cheap gym. (i had decided the one at work was too expensive for the frequency i'd been going there) this ones closer to home. at this point i'm still not finding time to go often enough. the most i've gone is 3 times a week. so to make up for that lack of motivation i did not renew my t-pass this month. so now i'm bike commuting. put the $70 into fixing up my bike. its a cerca 1994 specialized hybrid, steel frame. put a new seat on, then needed a new seat post, then i realized the tires were probably original so replaced those, and the tubes. probably should have replaced the wheels but the bf tightened up some spokes so at least they spin truer.

so since i started riding mid june about 11mi+ a day (+ if i go out anywhere other than just work then home). so far 5lbs down. most progress i can remember in a while. (they tell me that's a side effect, but i don't like to displace blame) i had been using the 'fitness pal' website to track my food and gym visits and it swore i would lose 1lb a week but i continued to lose absolutely nothing (in fact i gained). but i was never able to force myself to work out at the gym everyday, its so drab and seems like a drain of hours of my life i'll never get back. at least i can bike everyday b/c i have to get to work. i don't need to persuade myself to do it.

i think i will take actual measurements once a month, to see if those change. i've never tried that approach before since just weight can go up due to muscle mass vs fat. i'm basically just using the gym for weights/weight related machines.

maybe this year it won't snow either & i can ride all winter... i wish.

i've been frequenting the local pool. its busy now. too bad they don't have a free indoor one in the winter, but i'd never want to go if its cold. i never used the gym pool. and like most people i really can't swim. not fast or in any orderly fashion anyway.

so now i just have to keep the focus. also need to focus on the condo and reducing my "stuff" and bringing some order to the place. its hard to keep it clean and sane in there with the roommate and the cat both making messes. and i just have too many clothes for my closet. i wish i had the room to put in a closet or the foresight to know i have too much and just buy a huge standalone clothes hanging rack instead of a dresser. its so hard to find things to wear in drawers, i've never gotten used it it and therefore don't wear at least 1/2 my clothes. i guess i had thought of this before... i was going to get an armoire, but a dresser was just so much easier to find.

i should be getting out and playing with my camera also, get some photos up here. wrap up the site etc etc. i wonder if that will ever happen?