This year's Shakespeare in the Park was a play I haven't seen yet; Love's Labour's Lost. I got down there about 2 and a half hours before the show and got the best seats I could (tall chairs are relegated to behind blanket seating which is behind $80/chair seating). I think this is the first year I've been able to see and hear the play so it was definitely easier to follow. The story seemed simpler than the other plays. I was slightly disappointed there was no cheesy on stage fight to the death. The actors made the words seem funnier than I think they would on the page. There was also some silly dancing and costumes. The whole concept of guys breaking their vows of celibacy by making new vows to the first pretty women they see is comedy in itself. I wonder if back then any woman who was well off, dressed nice (and clean) would be the prettiest. 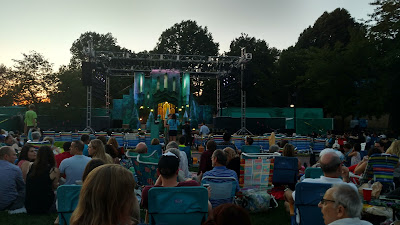 It was nice when the sun was up - I hid behind someone else's chair for shade - but once it dropped and the pretty sunset was gone the wind came up a bit and we wrapped up in the blanket I put down for our feet. At least the rain stayed away. I didn't have time to put a picnic together so I just went to Earl of Sandwich and got some wraps. They were pretty decent, not too badly priced - and way easier than making them at home and bringing them. There were some people staked out at one of the restaurants tables with huge containers of deli foods (like potato salad and such) chowing down on a brick of cheese. I was jealous (of the cheese). We planned on trying the special Shakespeare ice cream sundae after dinner but it was too chilly. 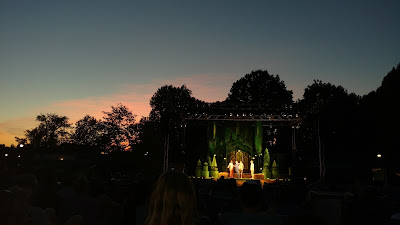 Unfortunately weather is looking stormy this weekend - even all the way up in Vermont. What do people do when it's raining in the summer? I just realized indoor water parks are a thing - the nicest one I found is over $300 for a room and admission! They boast of always tropical weather... But their temperatures are a little cooler than the actual tropics. Maybe now is the time to call up that rock climbing gym and ask if our 10 day pass from last year is still good! Alternatively, a brewery tour in nearby NH sounds plausible. It's a good thing we postponed our RI beach trip planned for tomorrow. It would have been a bust just like our Old Orchard Beach ME trip - beach weather wise at least. We didn't step a foot on the sand! <3 Amorette
Posted by Amorette at Friday, August 05, 2016 No comments:

Its August already! We are still waiting for some good beach days. Every time we seem to plan a beach excursion there are thunderstorms. A couple weeks back we went to Revere Beach and the sky started to get dark and as we packed up and headed off hail started to fall! We were trapped under some trees with a bunch of other beachgoers until it finally ended. The little kids had THE saddest faces ever. Then of course we headed back to the sand sculpture festival to have ice cream :) The sand sculptures did not look at all different following the storm, those things are tough. Boston hasn't really hit 95+ temperatures that I require for beach weather.

We did make it out to Vegas for a little trip to take a look at all the parks out there. We saw red rock canyon and fire valley and drove a long winding road down towards the Hoover Dam before heading back to Vegas. So HOT. But dry hot so not as much perspiration as the humid hot of Boston. The beach is always cooler than the city, but the only beach in Vegas is for hotel guests only :P We did manage to find a cool spring fed swimming hole on the winding road but it had a warning about bacteria so we just dipped our toes.

I think some VT mountains are in our future, looking at the map to figure out where it isn't thunderstorming - since it seems to always be thunderstorming!

Etsy is having some issues with processing orders so I had to disable the checkout system - That means manual PayPal invoices only. Keeping an eye on that and hopefully they fix all their WorldPay issues so I can start posting new items!

The season has been good so far. Interest at the shop is picking up. Had a wonderful New Years in Montreal with the bf. We lucked out on weather and it was around 30F during our visit with only tiny pretty snowflakes. The weather dropped to 6F the day after we left! We also lucked out on accommodations and stayed with a new to AirBNB host in a fabulous place. I'm sure next time we try to stay there it will have many good reviews (and maybe a higher fee! lol).

I've often thought hosting on AirBNB but now that I've started selling on Etsy my spare room is very much occupied. I've that some people who host on there are using it to rent out extra apartments they own, I suppose instead of renting it out on a yearly lease. I am not sure that there is an advantage to doing AirBNB instead of leasing the place out, unless they want to use the apartment to let relatives and friends stay occasionally and this allows them to reserve times for that.

The last time I was in Montreal was for Canada Day when I was in high school. I remember the fireworks being amazing and Celine Dion singing... but New Years fireworks aren't as great. There was a huge turnout for a concert at the waterfront and then short fireworks and a mad dash to the train before all the others got there. lol. I think next time I'll go back for Canada Day again, it will be warm and we can visit the other outdoor parks.

We visited the biodome and that was neat but the best part I think was Mount Royal. We were tired from walking a ton (my pedometer was at 15000+ steps) but we made it up to Mount Royal as night fell and climbed up to the chalet and looked out over the city. It was a cool place and next time I'll make sure to bring some CAD so I can get some hot chocolate from the vending machines. We saw lots of people cross country skiing and a couple people jogging (in snow! in sneakers!) and there was a tour on snow shoe. I do want to try snow shoeing but I don't think that was the right place to start we would have been beat if we had attempted to march around in the snow -up a mountain- for a couple hours. I'll try a lesson for a half hour first to see how it goes!

Winter isn't as great for travelling as the summer... obviously. We did a ton of camping in the summer and it was fun to get away on the weekends but I think my little compact car will be snowed in at home fairly soon. I've started planning a short trip to Miami FL so that will abate my travel lust for a bit. I've never been and I wish the trip could be longer but I hope I can see the everglades and the keys. I'm not super keen on the beach... it will be far too busy!